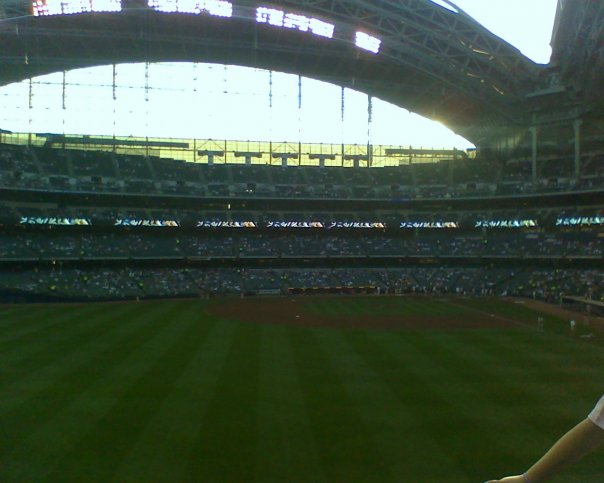 So Today, at the start of the day i was really feeling the goose egg. The Brewers were hitting nothing up! I’m going to be short and simple today. After Braun was taking reps in the outfield he tossed me up BASEBALL#1. Then new Brewer David Weathers threw me up BASEBALL#2. 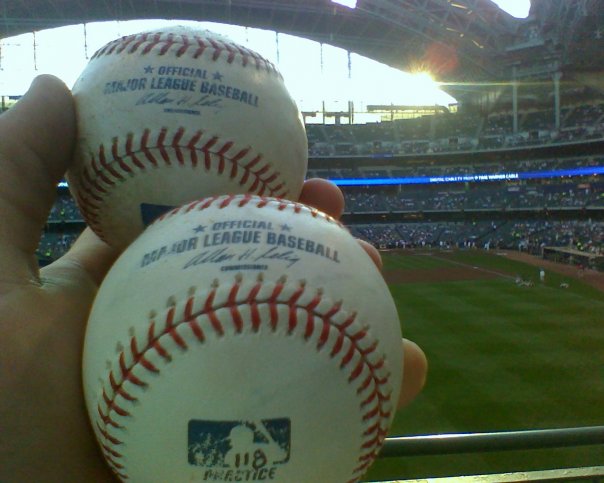 Then after Braun and Cameron warmed up before the first inning I got his toss up for my 100th baseball on the season making it BASEBALL#3! I was excited. I waited till like the last possible time to get number 100. It was driving me crazy being stuck at 99. But now it’s all good. A milestone… 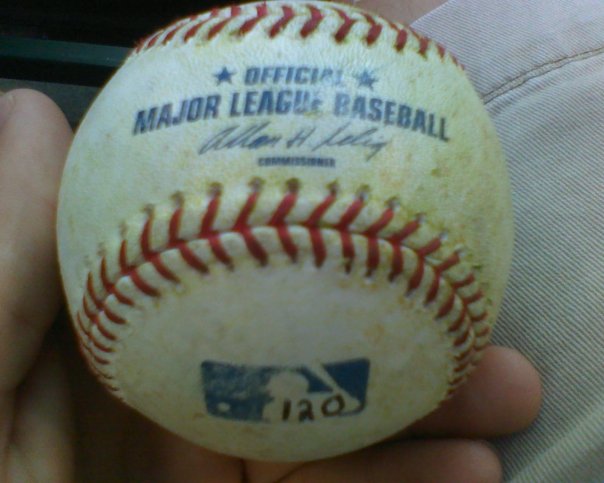 3 total, all thrown up

So Today we went early. We arrived at the confines at about 2:00 p.m. We wanted to try and get autographs but we were even late to get alot of the for a 7:00 p.m. start. The only guy I got was Frank Catalanatto but that’s cool.

We then went in at about 3:30 p.m. and kinda roamed the stadium trying to not get yelled at by the Event Staff. We did it successfully and watched Bill Hall, Mike Rivera, and Casey McGehee take a little bp before normal time. We then asked the host at Friday’s if we could just go stand out on the deck and watch the short bp. She said i’m not supposed to let you but…. I’m turning my head…GO! So we talked to Marcus and he shot me up BASEBALL #1. Alright sweet. Before normal bp even starts +1 baseball i guess. lol

Then there was one hit in the alley between the field and fridays walking to the bullpen. So a trainer came by and i asked him for the ball and he tossed me BASEBALL #2.

So then we watched the Brewers take and infield practice which I had never seen them take before. Picthers practicing covering 1st on bunts or little dribblers and the IF taking double play balls. Heh. Wierd. Bp started about 15 min late. So I ended up hoping the fence of Friday’s when Bill Hall blasted a bp hr ball and got it for BASEBALL#3.

Then Mike Cameron came out into the bullpen to stand in on some pitches while Braden Looper was pitching. I said Hows it goin mike? He said great man. I said you gonna hit some out during bp? He said prolly not I cant hit for power and laughed. I said you’ll hit one out. Sure enough I ended up getting one while hopping the fence again… BASEBALL #4. It has been 5 games since  I got more that 2 baseballs. I was excited sitting at 4 with Brewers bp coming to a close.

I went to RF for the Nats lefties to hit. They hit 2 up during thier session. WEAK SAUCE! I hollared at J.D. Martin and waved at him and he gave me the knucks. Then shot me up BASEBALL #5. They had those  practice baseballs. Kinda lame but it counts.

Then I went over the Left Field Bleachers and narrowed my way into the first row in the power alley. A ball was then hit short of the warning track where I stood hollaring at Nats pitcher Jason Bergmann. He then point up at me saying look a balls coming at you and I looked just in time before it would have pegged me in the shoulder and caught an Anderson Hernandez bp hr ball on a fly! Yeah BASEBALL #6!

Then randomly  Nats pitcher Ron Villone pointed at me and tossed me up BASEBALL #7. Nats bp had then concluded.

During the game is sat by the Nats bullpen. I noticed a beer had spilt and started dripping on the pitchers bag. I said something to Pitcher Mike MacDougal and he said thanks a few times. I then asked for an autograph after the game. He said yeah that’s great. So after the game he signed up 2 baseballs and tossed them to Matt and I for BASEBALL #8. It has been so long since I had reached 8. Only the 3rd time, I felt great.

View from my seat for the day: 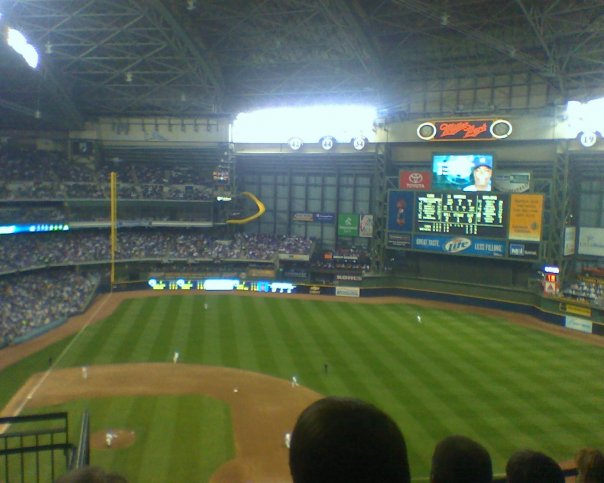 So I walked into Miller Park and immediately I hollar at Marcus Hanel Because he said he’d give me a ball today. And he says, HEY LOOK! I see coming towards me as I’m in the first row bleachers a Mike Cameron BP Hr Ball, BOOM Lands just over my glove, pick up behind me BASEBALL #1. 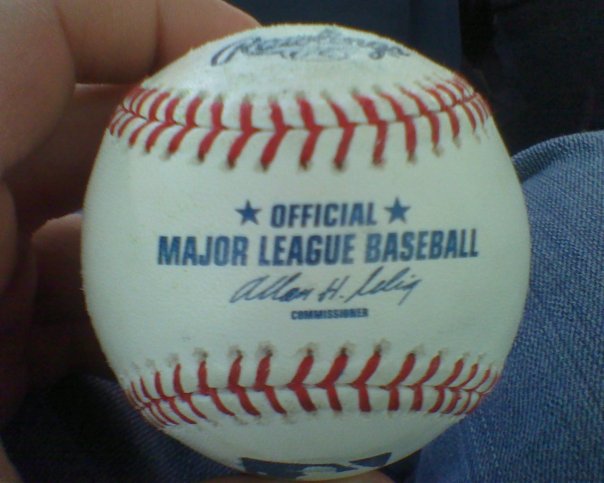 So then I sat down and in the next group walked up Mike Rivera. Crush, off the bat he hits a fly ball that just falls short of the bleachers. Ryan Braun catches it I scream Hey Ryan, how bout a ball please?. Throws it up to me, BASEBALL #2.

So then after that the cubs came up to hit. YAY! NOT! We’ll I was in the packed bleachers and somehow managed to get a hold of Carlos Marmol. And then I said Hey Carlos, Hook me up. He then threw it over to me. BASEBALL #3. Later on I dropped it down in the bullpen for Marcus Hanel to sign because it was the cleanest ball and he did. 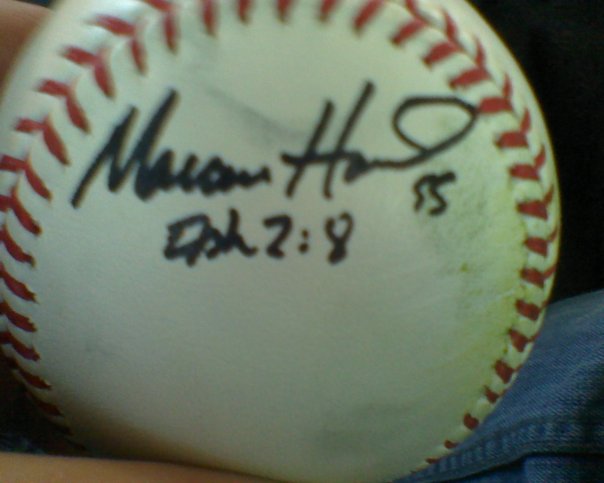 2 Thrown up, 1 Hit it bleachers and I grabbed

STATS OF 2008 – Pre – Ball Hawk
-20 baseballs during the season, all thrown up but one, that I barehanded during Bp a weeks HR

2009!
I must have paid like $140 for my seat for the first row bleacher section in 238. I went to BP but had no luck with that. Especially when the Cubs are taking it. But hey, What are you gonna do? So I pretty much gave up on the day. But there was still hope.

View From My Seats: 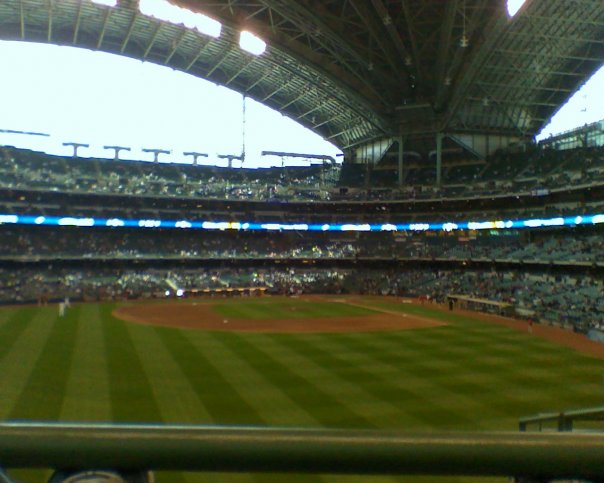 So my friend Matt and I sat in our seats ready for a great game. Ryan Braun and Mike Cameron were playing their usual catch between innings. Then I see Braun turn around. I hollar ay Braun, Over here. Throws it on a line right to my glove BASEBALL #1! 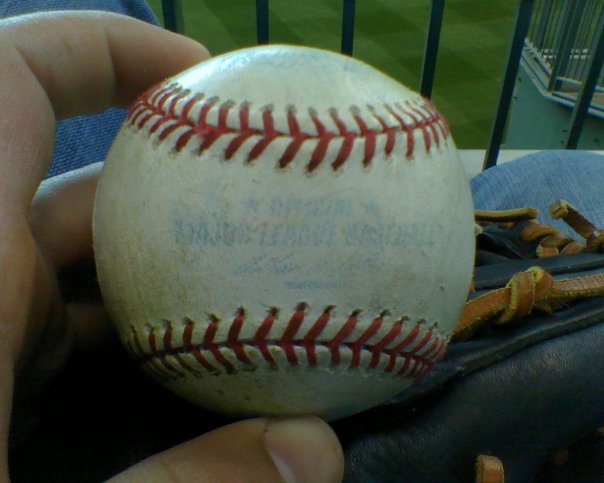