Today was a little bit of a different day going into Friday’s we were told there was no seating available above the bullpen outside… So we opted to sit on the “Home Run Porch” out in LF. We were under the bleacher overhang and on top of that there was a big pennant sign over us. This was going to be rough.

I ended up getting BASEBALL #1 courtesy of Brewers Pitcher Marco Estrada recently sent up from the Minor Leagues who has pitched pretty well so far. The baseball he threw me read. “IPAD”, they started to write things on the sweet spot of the baseball again.

That was all I had until the last group when Corey Hart stepped to the plate. He hit a bomb I knew was going to do one of 3 things, hit just above us, hit the pennant thing in front of me, or just miss the pennant thing and maybe hit the webbing of my glove. I ended up loosing the ball in the sun leaning over the railing to my left, stuck my glove out and it landed right in my glove. Marco Estrada and the people around me said nice catch and I was happy with BASBALL #2 which was number 198 of the career chasing 200!

As soon as we were let in for Astros Batting Practice I headed over to the Tundra Section where I would be sitting today and Wandy Rodriguez was walking out and I asked him for a ball and he threw me BASEBALL #3 with his opposite hand and he was surprised he made it to me and we both laughed about it.
Not even a minute later Astors OF Cory Sullivan threw me BASEBALL #4 which was my 200th career baseball and I was very excited that I had reached 200 baseballs, but I was on a roll so I went for another baseball that Lance Berkman ended up tossing me for BASEBALL #5. It was awesome that I ended up getting 3 baseballs in the matter of almost 3 minutes! Off to left field!

My next baseball was hit up and it rattled in the bleachers so it was a mad scramble for the baseball but I picked it up for BASEBALL #6 and I was pretty happy about being at 6 on the day. As any other person prolly would be as well. I think it was Hunter Pence who hit it but I was not exactly positive.

I would go on to get  BASEBALL #7 tossed up by Astros pitcher Matt Lindstrom and that was it for the day.

Here’s my view for the night: 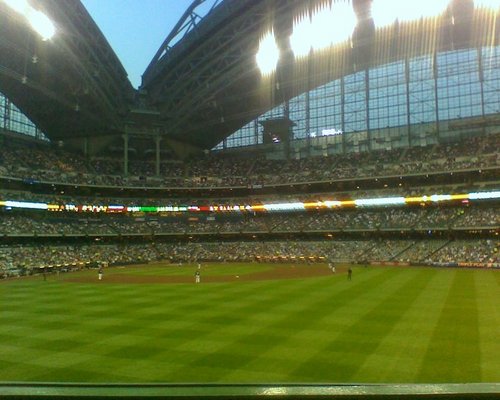 The Brewers went on to win 6-1 and snapped their 8 game loosing streak at home. Hopefully that flaw is in the rear view mirror: 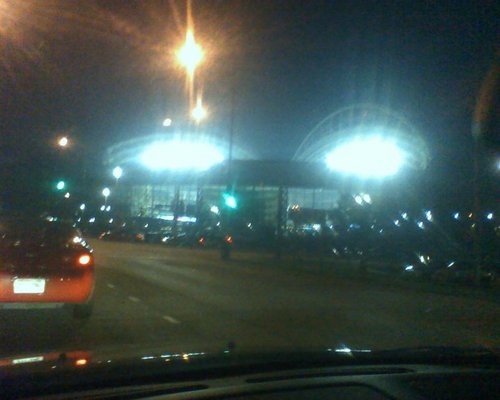 I got BASEBALL #1 courtesy of Jorge Julio throwing it up over some guys head and I grabbed it. Haha. I got lucky on that one.

Then Braun was taking a few in LF. Bill Hall hit one right to him and I asked for the ball and up was BASEBALL #2.

Then Brewers BP concluded. So I went up to the LF bleachers for Marlins BP. I said hi to pitcher Matt Lindstrom. He then done after playing catch threw up BASEBALL #3 to me.

Then Alfredo Amezaga was shaggin’ fly balls in CF. Like deep and dead center field. I was at the corner of the LF bleachers by the Brewers bullpen. Then I hollard, ALFREDO!!!!!! He looked at me and launched it all the way from CF pin point to my glove. BASEBALL #4 then concluded my day.

All 4 baseballs thrown up.