I was thinking and after this year I’m only going to go to about 10 Brewers games a year and ball hawk at the majority of them. I’m not going to try near as hard though. I’m gettin’ old. Haha. I’m planning on taking a few road trips next year to a few new stadiums and get some baseballs there. Also I plan on attending the 2011 ASG and Home Run Derby in Arizona. Time to start saving some dough. I decided I want to hit 300 career baseballs by the end of this year. which leaves me 81 away right now with roughly 18 games left this year prolly give a few. I need to average 4-5 baseballs a game. We’ll see if I can do it. Time for some updates because I’ve been way too lazy lately.
July 6:
The day started with a Zach Braddock toss up in Friday’s and I gave it to my buddy Sal because it was his Birthday. Happy Birthday buddy! BASEBALL #1.

Then Casey McGehee hit a home run and it doinked behind Friday’s into the indoor concourse. I hopped the fence and grabbed the ball and got yelled at by security. He made me walk all the way back around to get back inside with BASEBALL #2.

Just as we were about to leave Corey Hart hit a home run and it bounced in the bullpen and took the perfect hop into my glove for BASEBALL #3.

So, I went up to the bleachers in LF and Tim Lincecum was standing in CF and I hollared, “Ay Tim!” and he turned and I waved my arms and he threw me BASEBALL #4.  The baseball was game rubbed and everything.

Then I ended up with Pablo Sandoval cracking a shot off the bat and I moved down about 2 rows and made the catch on the fly to earn me BASEBALL#5 and my last baseball of the day. This baseball also happened to be game rubbed. Sweet deal.
My 9 year old brother Brady also happened to gather 4 baseballs together as well today. Pretty impressive! 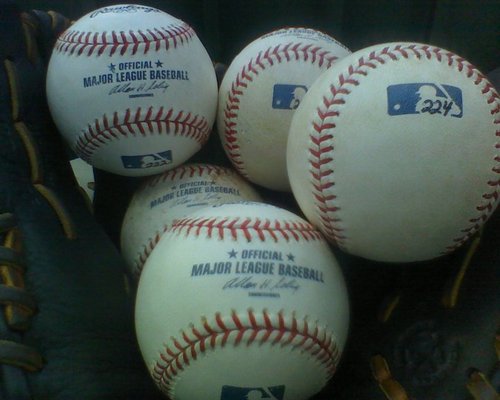 July 7:
Once again as almost every day, we started off at Friday’s. I got a Johnathon Lucroy toss up and a John Axford toss up for BASEBALL #1  & #2.  I proceeded to give the Axford baseball away to the kid next to me from San Francisco who’s empty glove needed a baseball. The kid thanked me and so did his mom and I was happy they were happy.

I then got a Giants pitcher to toss me up BASEBALL #3 and I gave that one away to a kid as well. I hate when I’m generous to give away baseballs and the kid doesn’t even say thank you. Oh well.

I then ended up getting another Giants pitcher to hook me up with BASEBALL #4 and I safely put that one in the bag to keep. That was it for the day.

July 9:
We sat in the Home Run Porch at Friday’s and I quickly for the second day in a row got Zach Braddock to toss me BASEBALL #1.

While sitting at Friday’s I saw a baseball hit in the seats and memorized where it was and when the gates opened I ran over to grab it for BASEBALL#2.

Pirates BP started and I was standing near the Foul Pole and Pirates P Sean Gallagher was standing in Left Center Field. He had 3 baseballs in his glove and I yelled Sean. He turned and looked. I then waved my hands and he launched me BASEBALL #3 and I graciously thanked him.

I then grabbed a Pirates BP home run ball that doinked around in the RF bleachers for BASEBALL #4 and shortly after caught a Pedro Alvarez ball on the fly to get BASEBALL #5 and snag my final baseball on the day. 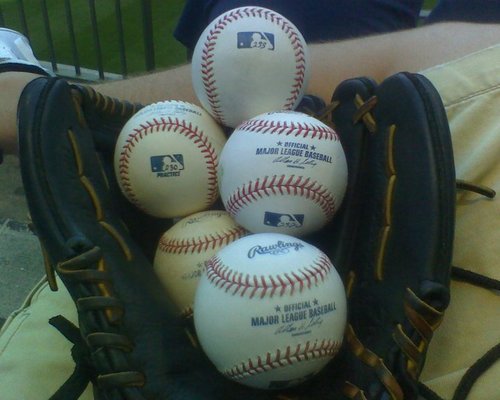 July 10:
Matt and I quickly ate at Friday’s and got up to the bleachers at 4:10 when the gates had opened. I ran down a Casey McGehee home run ball for BASEBALL #1.

Shortly after I nabbed Rickie Weeks on the fly to get me to BASEBALL #2 on the day.

I moved over to RF once the Pirates came onto the field and Justin Thomas shot me BASEBALL #3 for the day and I was determined to get at least one more.

I ended up catching Delwyn Young’s BP Hr Ball on the fly for BASEBALL #4 and I was content with that.

We were supposed to sit in the bleachers for the game: 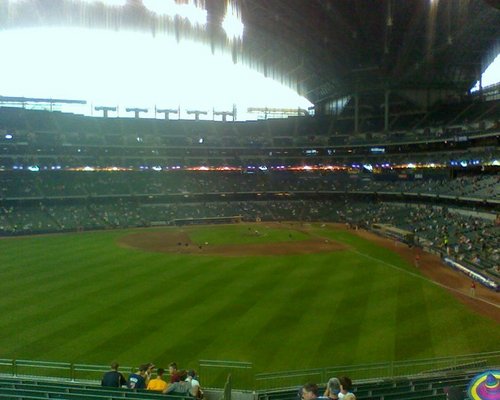 But we decided we never sit up high. So we went to the highest spot in the corner and watched the game from here: 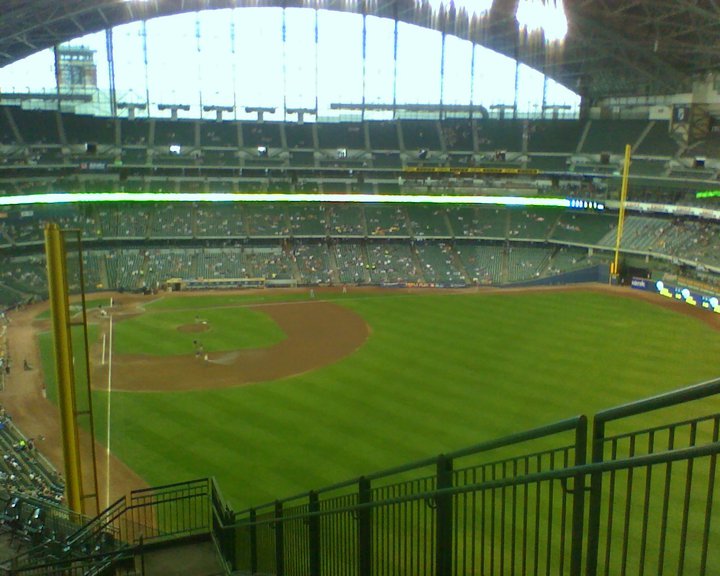 I don’t think the view was that bad. But anyways. Here’s a pic of the catch of the day: